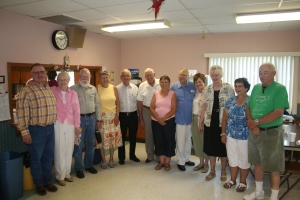 I love this picture from the reunion. It might be my favorite. To someone who doesn’t know our family it looks like nothing but a picture of a group of 60-70 something adults. But for those of us who know these people, there are some things that might make us look a second time.

The fifth from the right is my Dad.  He is surrounded by his wife, sisters, brothers-in-law, cousins, and their spouses. Oh, and his sister-in-law. This picture started as one of those spur of the moment, grab a group of chatting people, make them line up, and take their picture photo-ops.  I think we started with five or six. Then we started noticing more from their generation in the room and called them over. There are several pictures in the series and each has one or two more people. My dad’s brother, Jim had already left to go to the fair so he is missing, but his wife is there.

Another thing I like about this picture is the fact that none of these people have been divorced. A couple are on their second marriages, but that is due to the death of a spouse. These folks are in it for the long haul. They had a good example in my grandparents and their parents, all who stayed married until death parted them. In this day where families are so transient, ours stands out. I can truly say I have been surrounded by great examples.

At a store in Broken Bow I saw a plaque. It read. . .  “a good marriage is a union of two great forgivers.” I’m thankful for this generation and their determination to stick it out and make their love grow instead of letting it die. I love you all! I understand why you aren’t quite ready to be called “the older generation” but I’m thankful for the wisdom and strength you bring and I really think you are up for the challenge. Your parents were proud of you and we are so grateful.